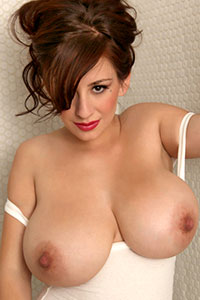 September Carrino rarely prefers to hurry the moment. The vexing vixen rather like to take things nice a slow. Savor each moment. Today, she’s got a very sexy scene in mind .. wearing a boob-hugging tanktop into the shower. But hold on turning on the water. September has a more sustained plan in mind.

Up against the tiled corner of the shower, September’s eye-popping, jaw-dropping JJ breasts are bulging out of the form-molding T-shirt – even before she begins to remove it. Her massive cleavage alone is more than enough to raise warnings for the weak of heart.

She then lowers her top and brings out her huge chest for all to see. And she hasn’t yet looked at the faucet. But trust us, she will …

And that will be a wet t-shirt scene to see! (Stay tuned).

Like 0
Thanks! You've already liked this
« Brooke Banner Big Boobs and Blue Lingerie » Emily Virginia Sexy Redhead Gets Applause at the Piano